1. The information provided in this announcement does not change DONG Energy's previous financial guidance for the 2015 financial year or the announced expected investment level for 2015-2016.

2. Hornsea Project One is one of three DONG Energy offshore wind farms granted a Final Investment Decision Enabling contract (Contract for Difference) by the UK Government in April 2014.

3. Hornsea Project One will see DONG Energy reach its strategic target of installing 6.5 GW of offshore wind by 2020.

About DONG Energy:
DONG Energy is one of the leading energy groups in Northern Europe. Our business is based on procuring, producing, distributing and trading in energy and related products in Northern Europe. Headquartered in Denmark, DONG Energy has around 6,500 employees, including over 600 in the UK. The Group generated DKK 67 billion (EUR 9.0 billion) in revenue in 2014. For further information, see www.dongenergy.co.uk

"Hornsea Project One is a world-leading infrastructure project being built right here in the UK. It is ground-breaking and innovative, powering more homes than any offshore wind farm currently in operation.

"We are making a major financial investment to construct this giant wind farm and this underlines our commitment to the UK market. Hornsea Project One will support the supply chain and help create local jobs. To have the world's biggest ever offshore wind farm located off the Yorkshire coast is hugely significant, and highlights the vital role offshore wind will play in the UK's need for new low-carbon energy."

"Thanks to Government support the UK is the world leader in offshore wind energy and this success story is going from strength to strength. DONG Energy's investment shows that we are open for business and is a vote of confidence in the UK and in our plan to tackle the legacy of under-investment and build an energy infrastructure fit for the 21st century.

"This project means secure, clean energy for the country, jobs and financial security for working people and their families, and more skills and growth boosting the Northern Powerhouse".

Once completed, Hornsea Project One will be able to meet the electricity needs of well over 1 million UK homes. It will be located 120 kilometres off the Yorkshire coast – further than the distance from Leeds to Liverpool. 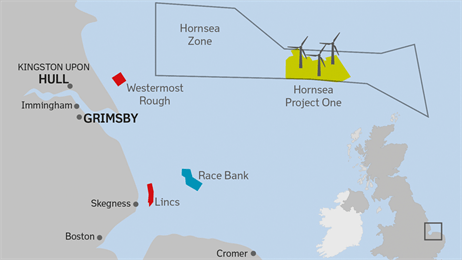 The project has the potential to create around 2,000 jobs during its construction phase with up to 300 additional jobs supported directly and indirectly throughout its operational phase.

Hornsea Project One will span a huge area of approximately 407 square kilometres, which is over five times the size of the city of Hull. The offshore wind farm will use 7 megawatt (MW) wind turbines, with each one 190 metres tall – larger than the Gherkin building in London.

Siemens has been named preferred supplier for the 7 MW wind turbines and the new Siemens turbine production facilities in Hull will support the project. A £25 million contract has also been awarded to UK infrastructure company Balfour Beatty for the construction of the onshore substation, underlining DONG Energy's positive impact on the UK supply chain.

"This is a historic milestone for Hornsea Project One as we are now making a firm and final commitment to invest fully in the project. Almost a decade on from initial planning, and following years of vital development work from a number of different companies in the supply chain, we are now ready to build the world's largest offshore wind farm."

As part of the project, DONG Energy will construct the longest ever offshore wind farm high voltage AC electrical system in the world. It will take the clean electricity produced by the wind turbines, transmit it to shore and then feed it into the national grid. This system includes more than 900 kilometres of cables, enough to stretch from Land's End to John O'Groats.

Hornsea Project One is expected to be fully commissioned in 2020.