A group of young people from the Liverpool area were invited to DONG Energy's facilities in South Canada Dock on 19 September to learn more about the world of work. 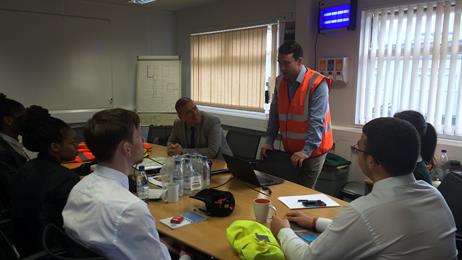 The day was organised as part of a new initiative from Liverpool Charity and Voluntary Services (LCVS) and United Way UK. Known as "First Day", the programme has worked with youth development organisation UpRising to introduce young people to business through those that lead it.

At the Burbo Bank operations and maintenance base, the group had a chance to meet and ask questions of the employees that work there. Employees from DONG Energy's HR team were also on hand to provide advice and guidance on what to expect from job interviews and some expert help on CV writing skills.

Lee Rollason, Head of Operations at Burbo Bank Offshore Windfarm, said: "I wanted to get involved as I wasn't a graduate when I entered the job market I progressed from a technician in the armed forces and worked through a variety of roles, using each experience to develop before being appointed as Head of Operations for Burbo.

"I felt there was a good connection with the group and I was able to show them that there is a way for them to get into work and succeed regardless of where they come from. I hope what they took from my experience is that work is what you make of it. It isn't a big scary world; people want you to succeed.

"We have a diverse group of people here from all different backgrounds, doing a variety of roles. Hopefully they will leave inspired by what they see here."

The young people are all part of a UK-wide youth leadership development organisation called UpRising, which aims to open pathways to power for talented young people from diverse and under-represented backgrounds.

Victoria Turnbull, North Regional Programme Manager for UpRising, said, "
We are hugely grateful for the opportunity to visit such a fantastic business such as DONG Energy. Through our leadership and employability programmes we know how important local businesses can be in inspiring young people to have the confidence to succeed. By allowing young UpRisers from across the Liverpool City Region to visit the Burbo Bank development and meet with employers, DONG are playing a critical role in supporting the young people that we work with."

Colin Heaney, Head of Policy, Partnership and Programmes at LCVS said:
"Together with local youth charities LCVS identified that lack of relatable role models and fear of the first day were the main barriers young people face when considering employment and professional careers. First Day helps to overcome these fears by introducing young people to business leaders, such as Lee, and giving them the opportunity to have a really positive First Day in work. We're delighted DONG Energy have supported this programme, giving young people invaluable advice and insight into the industry and career paths available."

First Day was launched at the International Festival for Business 2016 (IFB) in June 2016 for which DONG Energy was one of the sponsors. Lee Rollason also took part in a mass mentoring session attended by over 70 young people to launch the scheme.

DONG Energy in Liverpool area:
DONG Energy has been operating out of Liverpool Bay for a decade. Its Burbo Bank offshore windfarm was inaugurated in 2007, with the first commercial deployment of 3.6MW wind turbines which are now used widely across the industry. It is now constructing Burbo Bank Extension offshore windfarm and will be again pioneering new technology with the first commercial use of 8MW offshore wind turbines. Each turbine is capable of powering more than 7000 homes annually and the output from both windfarms together is enough to power the Wirral 350 times over.

The current construction facilities for Burbo Bank Extension are at the Cammell Laird site in Birkenhead, where DONG Energy employs around 90 people.

DONG Energy will be opening a multi-million pound new state of the art operations and maintenance facility in King's Wharf, Seacombe to serve its two windfarms in the area. Construction has already started and the building is due to be operational in the second half of next year. Up to 75 jobs are being created during construction while around 45 people will be employed at the site when it is operational.

UpRising is a UK-wide youth leadership development charity. Our mission is to open pathways to power and opportunities for a diverse range of talented young people. We address the problem of unrepresentative power in the UK by equipping young people with the attributes needed (knowledge, skills, networks, confidence) to realise their potential and attain key leadership positions.

The award-winning charity has been delivering programmes since 2008 across London, Liverpool, Greater Manchester, Luton, Bedford, Stoke, Birmingham, Blackpool and Cardiff and will serve 2,000 young people in 2014/15 alone. We have a growing alumni of over 3,000 young people and our founding patrons include the Former Prime Minister David Cameron MP, Ed Miliband MP and Nick Clegg MP.

UpRising is currently recruiting young people for their Leadership and Employability programmes across the UK. Young people aged 19-25 can apply via the UpRising website.