Rochdale-based Granada Material Handling Limited (Granada) is the latest UK firm to sign a contract with DONG Energy for the world's biggest windfarm, Hornsea Project One. 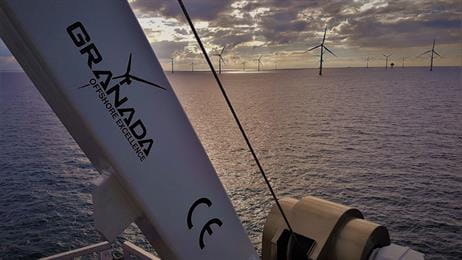 With a capacity of over one gigawatt (GW), Hornsea Project One will be capable of supplying well over one million homes when it is built, 120km off the Yorkshire Coast.

Each of the 7MW turbines will require a davit crane and Granada will assemble and test all 174 at their facility in Rochdale, near Manchester.

Duncan Clark, Hornsea Project One Director, said: "We're delighted to award another UK firm a contract to supply Hornsea Project One. It's such a huge project and so really great to see contracts of all sizes benefitting UK firms.

Earlier this year, DONG Energy awarded a multi-million pound contract to Babcock for the world’s first offshore reactive compensation station, a contract that has helped to secure around 100 jobs at their facility in Rosyth, Scotland.

Hartlepool-based JDR cables will provide 242km of array cables, the largest contract in JDR’s history, whilst J. Murphy & Sons Limited (Murphy), headquartered in London will lay over 350,000m of onshore cable along a 38km route.

Just last month DONG Energy announced that DeepOcean, a Darlington based firm will transport and install the array cables. This contract has safeguarded 150 jobs in Darlington and the surrounding area as well as enabling DeepOcean to offer significant opportunities to the UK supply chain.

"With more projects planned in the UK, it is of strategic importance to us to develop the supply chain here. Earlier this month we announced our investment in CS Wind's facility in Campbeltown enabling them to be the first company in the UK with the ability to manufacture offshore turbine towers.

"Today's contract benefits not just Granada but also their UK-based suppliers. Orders like this will help to develop suppliers' expertise for future UK offshore projects, and hopefully projects even wider than the UK."

As part of its strategic sourcing strategy for Hornsea Project One, DONG Energy is placing orders with UK firms, such as Granada, for many components and services for the project (see below). Granada, who design and assemble the cranes, also place importance on local sub-contracts with their main fabricators in Bolton, final motor assembly in Leeds and painting and coating near Liverpool.

Mark Sidwell, director of Granada Material Handling Ltd, said: "We are extremely pleased to have been awarded another prestigious UK wind farm project. Securing this contract has been a real team effort by the Granada Renewable product and service division.

About DONG Energy:
DONG Energy (NASDAQ OMX: DENERG) is one of the leading energy groups in Northern Europe, headquartered in Denmark. Around 6,500 ambitious employees, including over 700 in the UK, are engaged in developing, constructing and operating offshore wind farms; generating power and heat from our power stations; providing energy to residential and business customers on a daily basis; and producing oil and gas. Group revenue was DKK 71bn (EUR 9.5bn) in 2015. For further information, see www.dongenergy.co.uk or follow us @DONGEnergyUK on Twitter.
"The Hornsea Project One contract is not only great news for Granada but also for our UK based supply chain. Granada has ambitious plans for this market sector and having supplied over 650 offshore davits is the UK's leading offshore wind farm davit crane supplier'.

Each crane weighs approximately 3000kg and has the lifting capacity of one tonne. They will be fixated to the foundation platform next to the turbine tower, to help lift parts and tools from the boats that transport the crew (Crew Transfer Vessels) to the turbines.