To celebrate International Women in Engineering Day on 23 June, we ran a competition with social enterprise Stemettes, offering one lucky winner a helicopter flight around the newly opened Race Bank offshore wind farm, the fifth largest wind farm in the world. 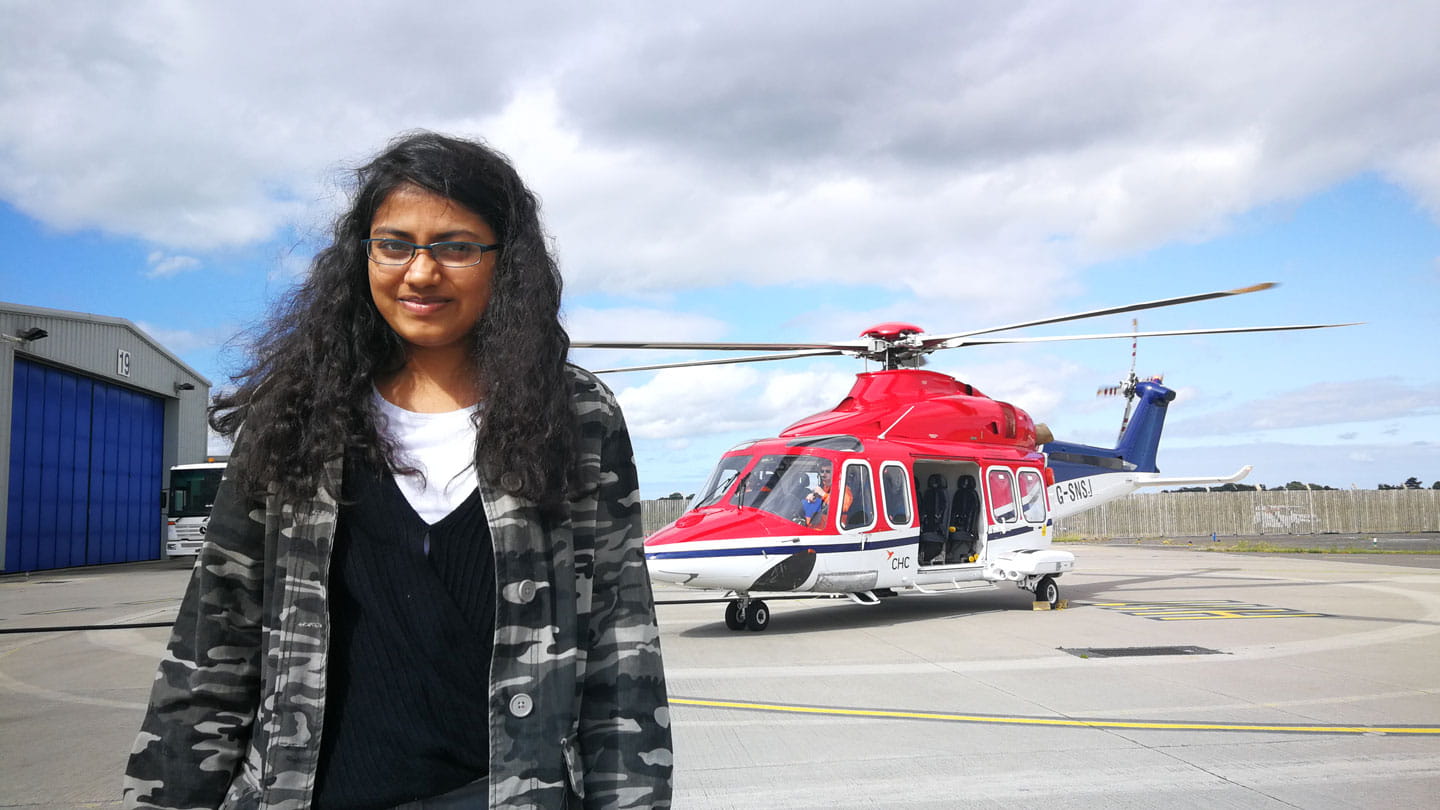 Stemettes is an award-winning organisation working across the UK & Ireland to inspire and support young women into Science, Technology, Engineering and Maths careers (collectively known as STEM). To enter the competition, users of the Stemette app had to submit which renewable energy scientist inspires them and why. 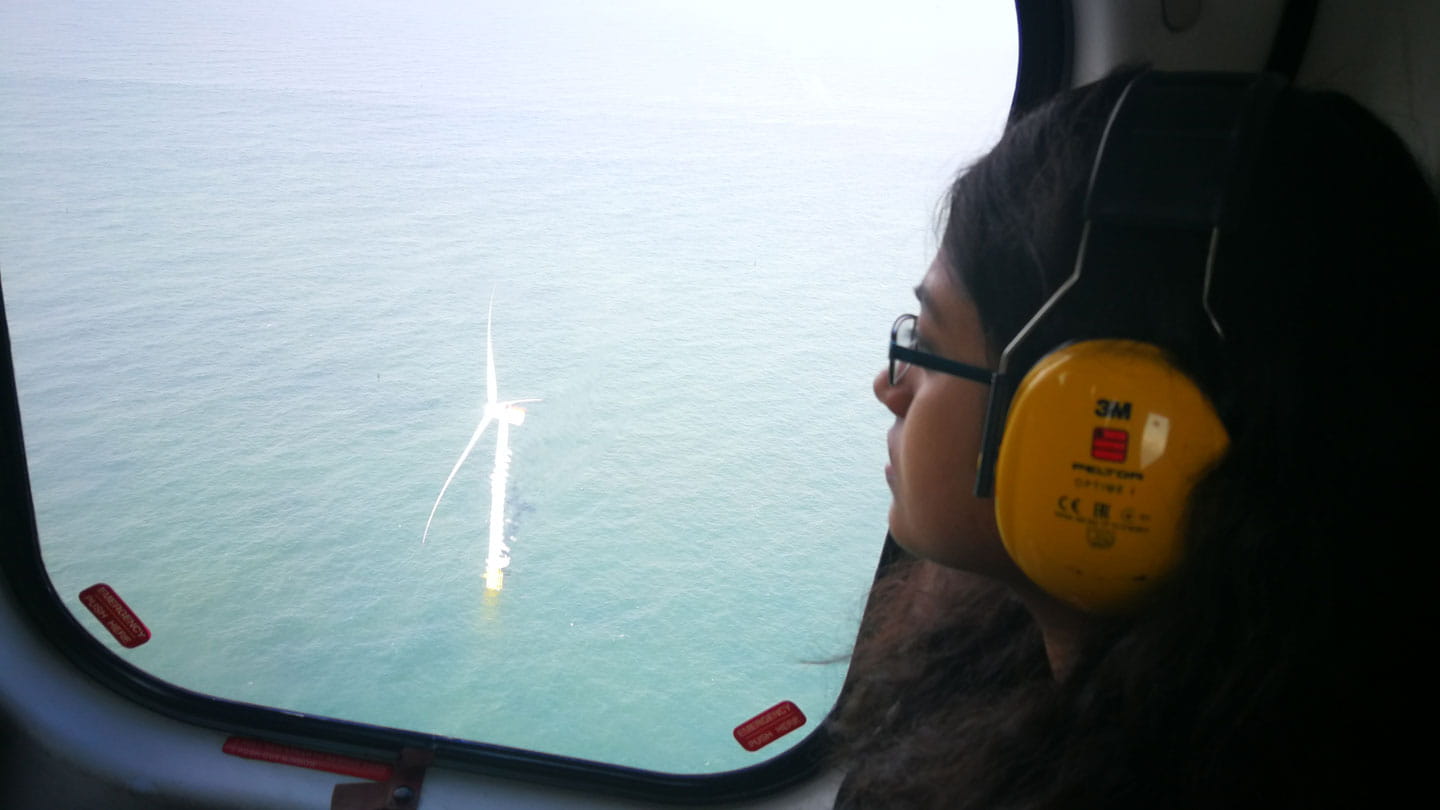 Winner, 19-year-old Cynthuja Ramanan said she was inspired by Dr Elizabeth Gibson, lecturer in Physical Chemistry at Newcastle University, for her research into designing solar cells that function on a molecular level in tandem with dye-sensitised nanostructured electrodes.

Cynthuja now studies bio-medical engineering at Kings College London, however came across Dr Gibson’s research whilst at school, doing a project about renewable energy. She was particularly interested in the process of artificial photosynthesis and looking at how we can use nature to improve technologies.

As part of the prize Cynthuja got a tour of the Edda Passat Service Operations Vessel (SOV), a brand-new ship which has transformed the way Ørsted services its wind farms, allowing easier access to turbines and more efficient shift patterns. 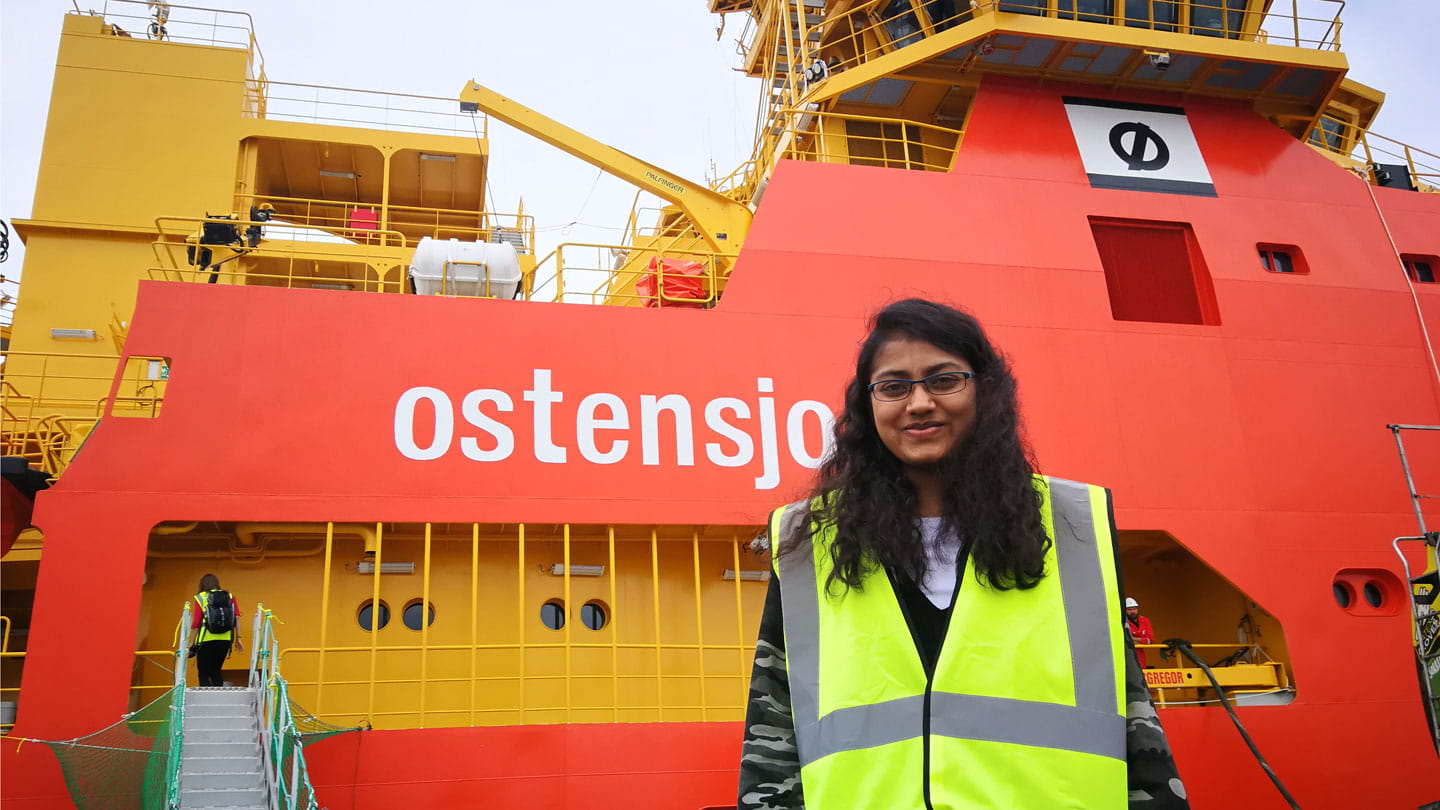 She then had a unique opportunity to take a helicopter over Race Bank offshore wind farm which can power half a million UK homes with clean energy. The wind farm, which covers an area of 75 km 2 (as big as 10,500 football pitches) with 91 turbines, 177m tall from sea level to tip.

Cynthuja said: “Upon arrival at the SOV site, I was introduced to some of the members of Ørsted who had worked closely with the Race Bank Project, including Matthew Wright, Ørsted UK managing director and David Summers, Race Bank Project director. Following this, I was interviewed by David Burns with BBC Radio Humberside about the prize I had won and STEM in general.

“Afterwards, we were taken on a tour of the Service Operations Vessel (SOV). The SOV is a vessel that allows operations and maintenance technicians to walk directly on to a turbine in order to carry out their roles more easily. This allowed technicians to take longer shifts of two weeks on and two weeks off. Some of the rooms we were taken to include the control room and equipment store room. We were also shown the cabins, dining room and games room, giving us an insight into the lives of the technicians when they weren’t working. Whilst on the tour, I had an opportunity to interview Georgia Grace, a Race Bank technician, in which she told me more about her job and route into STEM and provided me with some useful advice.

“We then took taxis to Humberside Airport, for a helicopter tour of the Race Bank Project. Despite having read the facts about the Race Bank Offshore Wind Farm, I was still shocked at the size of the blades of the turbines. We were told that one blade is 75m long and one rotation of the blades could power an average household for a whole day!

“Overall, I enjoyed being able to see a concept studied in school in action. Both the tour of the SOV and the helicopter ride will be a memorable experience that I might not have otherwise gotten at this stage of my education.” 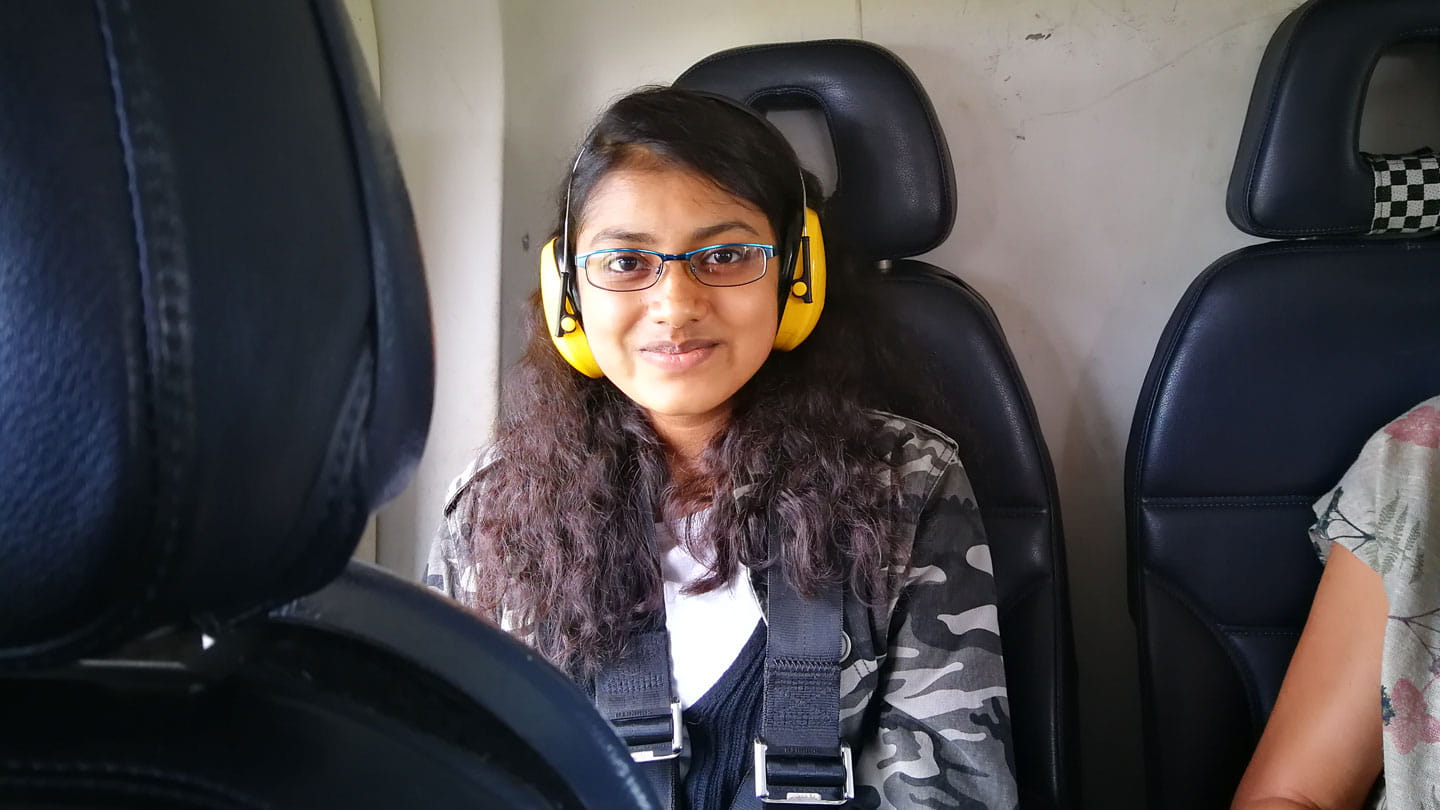 Matthew Wright, Ørsted’s UK Managing Director, said “It was our pleasure to welcome Cynthuja to our site in Grimsby, and show her different aspects of offshore wind in action. As a leading company with a growing demand for engineers, it’s extremely important that we continue to inspire young people to work with us in generating green energy.
“To promote diversity in the industry we are engaging with more women and girls to show them the exciting opportunities available. Diverse workforces are more innovative and more productive, and we want to attract the best talent from all backgrounds to keep us ahead in the transition to renewable energy.”” 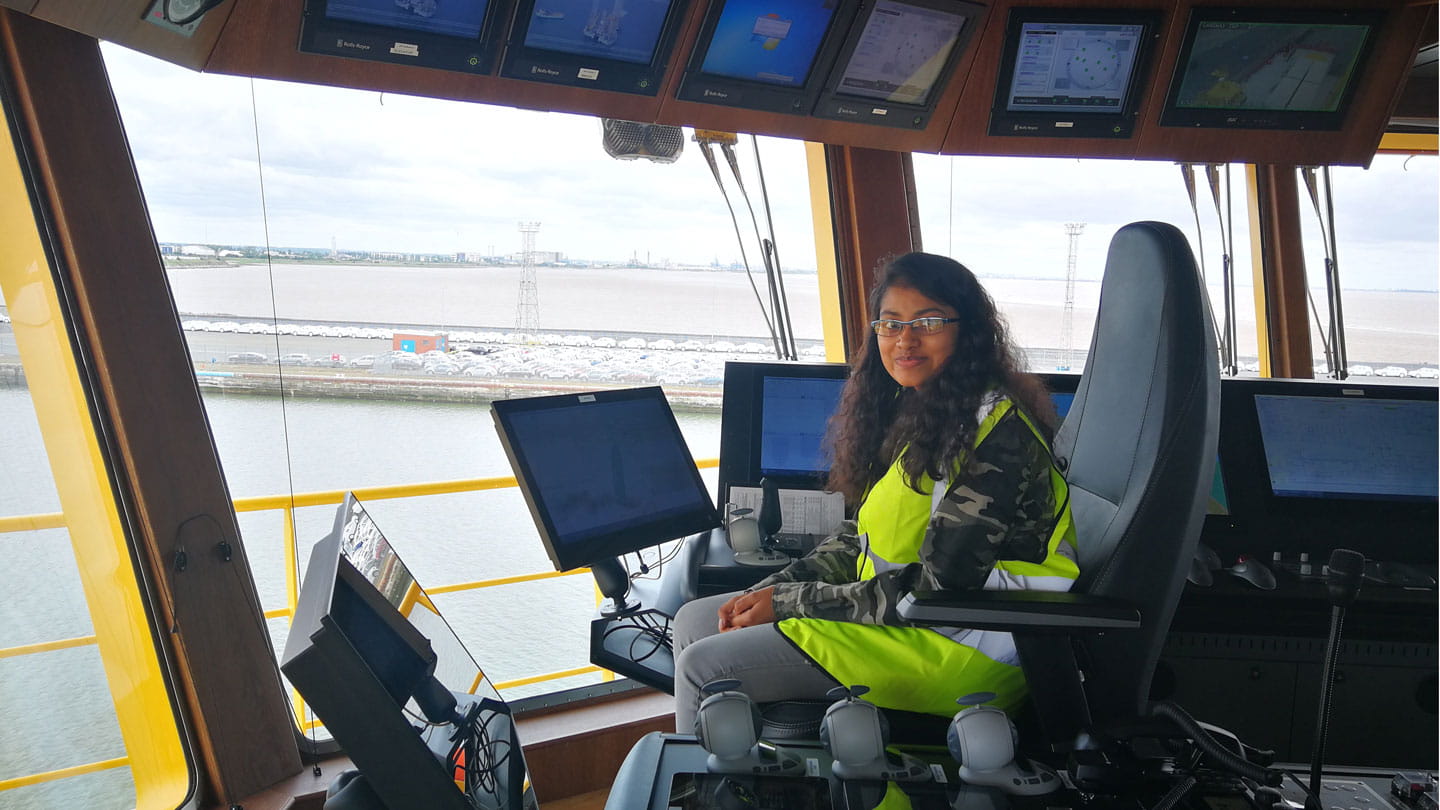