DONG Energy is the first company worldwide to have installed 1,000 offshore wind turbines. 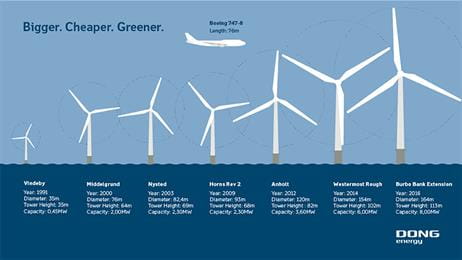 Offshore wind turbine number 1,000 was commissioned at the German offshore wind farm Gode Wind 2, which is one of the many that DONG Energy fully or partly owns and operates in the UK, Denmark and Germany.

A number of major milestones in offshore wind have come in the UK – in 2007, the Burbo Bank offshore wind farm in Liverpool Bay was the first to use the world's biggest offshore wind turbines at the time at 3.6 megawatts (MW).

The next breakthrough came in 2015, when DONG Energy built Westermost Rough offshore wind farm off the Holderness coast with 6MW wind turbines. And in September this year, DONG Energy installed the first 8MW offshore turbines at Burbo Bank Extension.

"In the space of only a few years, offshore wind has evolved from being a niche technology to being recognised as a reliable and clean energy source supplying power on utility scale and playing an important role in the green transformation of the energy sector. With 1,000 offshore wind turbines, we have a unique level of experience of constructing and operating 'power plants' at sea, and this is crucial to ensuring that we can continue to reduce the costs of green electricity from offshore wind."

From 2016 to 2020, DONG Energy is set to build more offshore wind capacity than it built in the preceding 25 years. And today's wind turbines deliver almost twice as much energy as the first offshore wind farm.