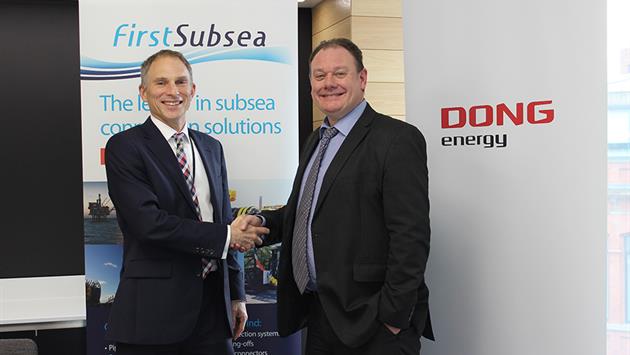 First Subsea, a Lancaster-based business, has today [20 Feb] signed a multi-million pound contract with DONG Energy, enabling it to venture into a new and lucrative industry.

Founded in 1994 the company, which specialises in mechanical connectors, enjoyed huge success in the oil and gas industry for many years. However, the fall in oil price caused sales to dwindle and a new strategic direction needed to be set.

In 2014, First Subsea obtained Government funding to develop their patented technology for use in the offshore wind sector and today it celebrates the fruits of its labour with a multi-million pound contract with the global leader in offshore wind.

This significant order, for 151 Cable Protection System (CPS) units, will be the first major UK contract in renewables for First Subsea and will allow the business to diversify into this growing market. The units will be used for Hornsea Project One offshore windfarm, which when built will be the biggest windfarm in the world.

John Shaw, Managing Director, said: "This contract agreement is the culmination of years of hard work at First Subsea and a very proud moment for us all. We recognised the growth of the renewables industry, particularly offshore wind, when we applied for the grant to develop our processes a few years ago. We knew it would be hugely beneficial in the long term if we were able to diversify.

"Delivering on this contract with a global player like DONG Energy will demonstrate our capabilities to the rest of the offshore wind industry, both in the UK and hopefully wider into Europe too. I can't stress how much of a great opportunity this is for our business."

Duncan Clark, Hornsea Project One Programme Director said: "Offshore wind development in the UK is thriving and we're seeing a lot of firms, and also skilled people, diversify from oil and gas into this rapidly growing industry. DONG Energy is also an example of this, having been oil and gas focussed for many years we recently announced our intention to sell our oil and gas division, as well as a pledge to be coal-free by 2023.

"This trend is not only good for business it's a responsible approach to the energy transition, so we're delighted to see other firms recognising this too. The UK is the global leader in offshore wind and to maintain that status, we need to develop a strong supply chain here, so it's both refreshing and reassuring to see that businesses of all sizes are able to adapt their expertise to venture into this wealth of opportunity."

Hornsea Project One will be built 120km off the Yorkshire Coast. It will be the first offshore windfarm with a capacity over 1GW and capable of powering well over one million homes. Onshore construction has started and the windfarm is expected to be operational by 2020. The offshore wind farm will use 7 megawatt (MW) wind turbines, with each one 190 metres tall – larger than the Gherkin building in London.

DONG Energy then awarded a multi-million pound contract to Babcock for the world's first offshore reactive compensation station, a contract that has helped to secure around 100 jobs at their facility in Rosyth, Scotland.

Hartlepool-based JDR cables will provide 242km of array cables, the largest contract in JDR's history, whilst J. Murphy & Sons Limited (Murphy), headquartered in London will lay over 350,000m of onshore cable along a 38km route, connecting to the national grid at a new onshore substation being built by Balfour Beatty.

In November 2016 DONG Energy announced that DeepOcean, a Darlington based firm will transport and install the array cables. This contract has safeguarded 150 jobs in Darlington and the surrounding area as well as enabling DeepOcean to offer significant opportunities to the UK supply chain.

In December the company announced a multimillion pound contract with Rochdale-based firm Granada to provide all 174 davit cranes for the project.

In January 2017, the contract for 96 transition pieces was signed with Bladt Industries: 56 of these will be manufactured in the Offshore Structures Britain facility in Teesside.

In February the remaining 20 transition pieces were awarded to Steelwind, with Teesside based Wilton Engineering providing a significant part of the scope including outfitting, coating and load-out. The opportunity will create jobs within Wilton Engineering and local supply chain.