DONG Energy has been awarded a contract to build its Hornsea Project Two offshore wind farm, at the lowest-ever price for offshore wind in the UK. 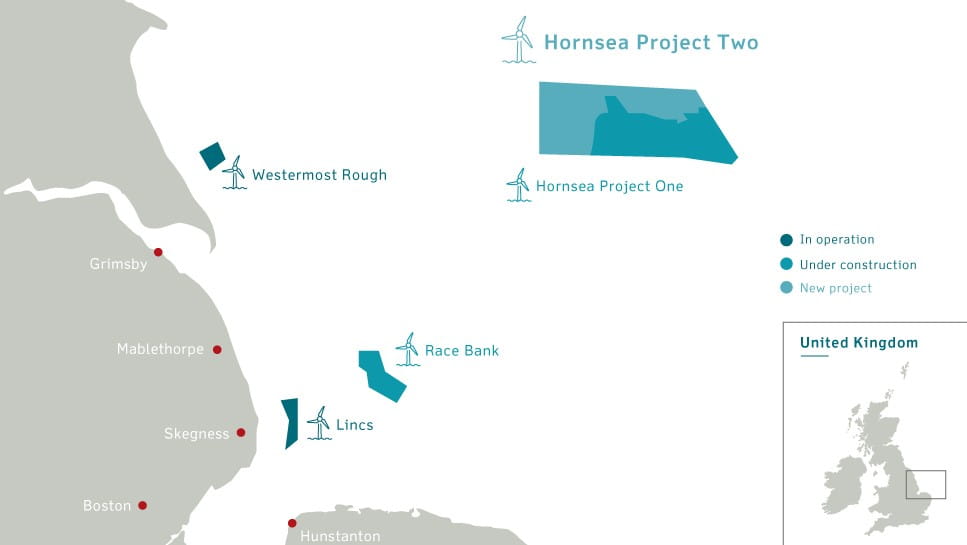 At 57.50 £/MWh, the strike price for the Contract for Difference (CfD) is 50% lower than the previous round of CfD allocations just two years ago, demonstrating the rapid reduction in cost across the industry.

Hornsea Project Two will contribute significantly to DONG Energy's ambition of reaching a total offshore wind capacity of 11-12GW by 2025.

"We're delighted to be awarded a Contract for Difference for Hornsea Project Two, which is another important step towards fulfilling our vision of making offshore wind the most competitive form of electricity generation.

"We have always promoted size as a key driver for cost. The ideal size of an offshore wind farm is 800-1,500MW, and therefore it is natural that Hornsea Project Two will deliver record-low costs to society. At the same time, the low strike price demonstrates the cost saving potential of developer-built offshore grid connections, which in the UK is included in the project scope.

"We remain fully committed to financial discipline, and Hornsea Project Two will be value creating to our investors."

"This is a breakthrough moment for offshore wind in the UK and a massive step forward for the industry. Not only will Hornsea Project Two provide low cost, clean energy to the UK, it will also deliver high quality jobs and another huge boost to the UK supply chain.

"Successive governments deserve great credit for providing the certainty for continued investment in offshore wind, enabling it to become the thriving renewable industry it is today. Costs are falling rapidly, long-term and highly-skilled jobs are being created across the North of England and the UK supply chain is going from strength to strength. We're now really seeing the benefits of this commitment to offshore wind and there is still so much more to come. Indeed, it has the potential to play a key part in the realisation of the UK's industrial strategy."

DONG Energy is already constructing Hornsea Project One and has started the consultation process for Hornsea Project Three, underlining the huge potential of this area of the North Sea for offshore wind.

With the allocation of the CfD, DONG Energy has now taken a Final Investment Decision on Hornsea Project Two. The information provided in this announcement does not change DONG Energy's previous financial guidance for the financial year of 2017 or the announced expected investment level for 2017.

DONG Energy has invested GBP 6 billion in the UK to date and will reach GBP 12 billion in UK investments by 2020. DONG Energy fully or partly owns nine operational offshore wind projects in the UK: